PAOLA PIVI: I WANT EVERYTHING, INSTALLATION VIEW, ANDY WARHOL MUSEUM, 2022. COURTESY OF THE ARTIST AND PERROTIN. PICTURES OF ATTILIO MARANZANO

Jhere is a new zen space at the Andy Warhol museum.

The first things you’ll notice in the gallery are stacks of colorful mattresses hanging on top of each other. The artwork, “Milano,” was made in collaboration with More-So, a division of Italian design firm Moroso, and you’re invited to slip on some shoe covers and jump inside.

“They kind of have this kind of whimsical ‘princess with a pea’ thing – they look folkloric, they look mythological,” says José Carlos Diaz, chief curator at Warhol, of this section of the new exhibit. by Italian artist Paola Pivi, “Paola Pivi: I want it all”. “The idea is that you can crawl inside and have your own little sanctuary or habitat.”

On the far wall is Pivi’s “Bigger Than My Eyes”, a slowly spinning wheel with peacock feather spokes. It is a fascinating experience that invites you to linger and breathe.

And sitting on a custom platform is a miniature replica of Warhol’s famous couch (the full-size replica is in the building’s lobby), soaked in perfume. Pivi is used to resizing iconic and well-known pieces of furniture, Diaz says, and the sofa that was in Warhol’s factory was a perfect fit.

“It’s an amazing couch, and clearly they lived on that couch, he created art on the couch,” Pivi says. “It was like the center of attention in his studio life, and when I started this sofa series, it was because the sofa is a place where life happens.”

“We talk about how this room still feels like a wellness center,” says Diaz. “It’s a very therapeutic feeling, with an aroma, the idea of ​​lying down, the idea of ​​being hypnotized, being calm. The senses are very activated, whether it’s sight, smell, touch. 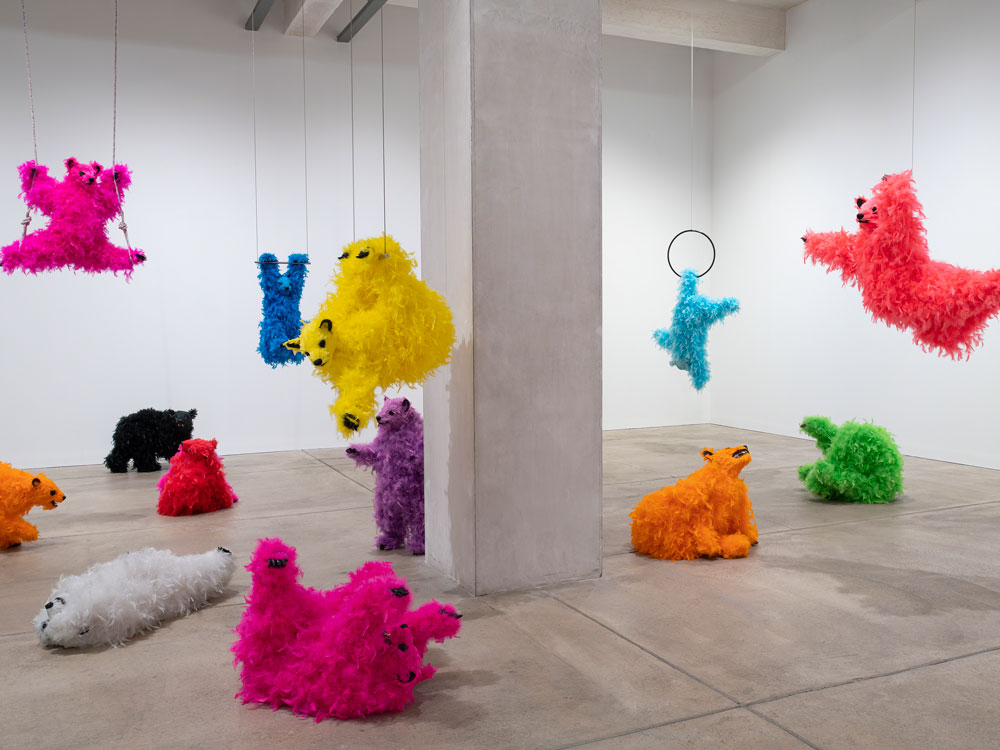 The three galleries of “I want it all”, on view until August 15, each have their own unique look. Across the hall is a collection of baby polar bears, a variation of Pivi’s life-size polar bear sculptures. These cubs each have their own personalities – some are fighting or playing, one is chewing on a shoe, another is hanging from a trapeze – and their “fur” is actually neon feathers.

Also in the gallery is a work with a different kind of animal: a photograph of “Yee-haw” by Pivi, from 2015, when she was commissioned to mount a work with live horses under the Eiffel Tower.

And then there are the shoes.

In the opening gallery, “Untitled (shoes)”, commissioned by The Warhol, is mounted on all three walls. For work, Pivi asked people to donate a pair of their shoes – 125 pairs have been worn, and their exact counterpart lives next to them on the wall, immaculate.

“Shoes are often tied to professions, class, but now they’re also tied to vanity, style…geographically, where you live,” Diaz explains. “And so what’s really beautiful about these shoes is that they’ve been worn for a year, by people all over the world, and you get clues about who they are, who they are professionally, maybe be what was the climate they were in when they were wearing these.

“Then to bring them all here collectively, because Warhol himself was surrounded by all kinds of interesting people…if you look at this gallery, it almost looks like animal trophies or butterfly specimens.” 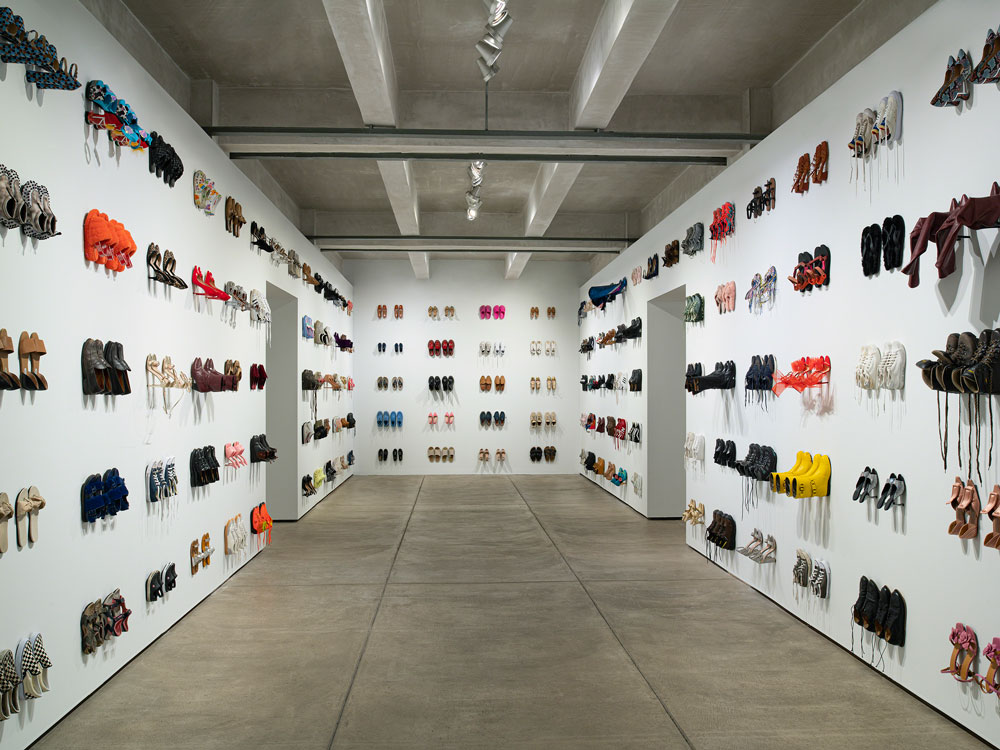 Diaz notes a relationship to Pivi’s famous work “Guitar Guitar”, where sets of two identical objects were compiled into a giant space.

Some of the shoes belonged to Pivi herself or members of her family. One pair was worn by Diaz; another by Pittsburgh drag queen Dixie Sherwood. Many were from people on the street that Pivi came into contact with; she told them that she admired their shoes and wanted to put them in her exhibit. Owner origins range from Pittsburgh to Alaska (where Pivi now lives) to Italy and India, and brands range from Crocs to Jimmy Choos.

“It’s like an individual’s diary,” Diaz says. “They bear the scars of the people who wore the shoes, and then they come here as one installation.”

A FORMER professional footballer was caught with tens of thousands of euros worth of fake football shirts, cigarettes, DVDs and sportswear when Gardai raided his home. Kevin Doherty, 44, pleaded guilty to a number of charges while appearing at the Letterkenny Circuit To research in co Donegal. 2 Kevin Doherty leaves Letterkenny Circuit CourtCredit: NW […]

Primark is selling a pair of slip-on shoes similar to the infamous Crocs clogs, but shoppers are unconvinced by the £4 shoes as some have called them “the ugliest ever”. Primark sparked debate after selling £4 pair of shoes ( Image: Reuters) Primark has come under fire for selling a pair of £4 shoes which […]

Nike has doubled down on its litigation against StockX in a heavy-handed lawsuit between the world’s largest shoemaker and shoe resale platform hypebeast which is now valued at $3.8 billion. The battle started in February, when Nike filed a lawsuit against StockX, after StockX announced a program that promised to turn your shoe purchases on […]