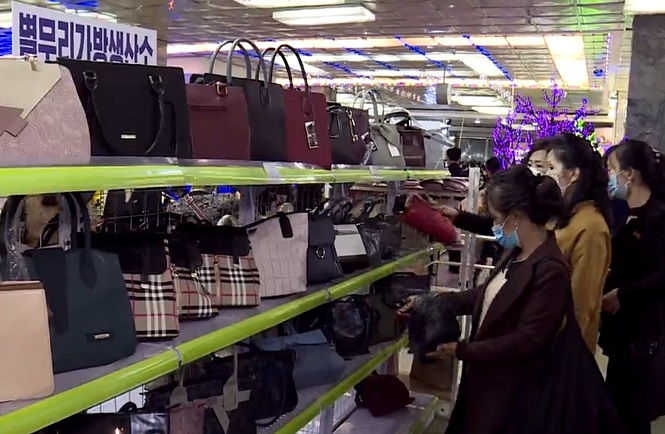 According to a recent report by DPRK Today, a China-based North Korean propaganda outlet, a variety of counterfeit foreign luxury items were displayed at a consumer goods exhibition held at Department Store No. 1 from Pyongyang.

Chanel bags printed with the logo were on display at a stand set up in the department store. Also found were fake Burberry bags, perfume bottles copying the design of Dior and shoes counterfeiting the design of Japanese sports brand ASICS.

Apparently, Pyongyang shed light on improving the quality of its consumer goods, saying all items on display were made using its own technology and capabilities.

Another propaganda outlet, Maeari, pointed out that all items on display at the expo, including shoes, clothes and groceries, were North Korean products made by indigenous brands.

For Pyongyang, the ability to produce consumer goods for itself has become much more important as it faces strict import restrictions due to international sanctions.

In this context, the country seems to have chosen the “shortcut” of counterfeiting famous foreign models to quickly market certain attractive items.

Forever 21 owner Authentic Brands Group (ABG) and payment technology company Bolt said they are continuing their partnership after settling a lawsuit filed by ABG against Bolt, according to a Wednesday, July 6, press release. With the lawsuit dismissed, the two companies will explore the possibility of extending Bolt’s technology to other ABG brands, the […]

The Rise and Fall of Amazon: Forgotten Brands, Brand Trolls, and the Withdrawal of Chinese Sellers

Thanks to rapid advances in technology and a global pandemic that has devastated physical businesses, contactless e-commerce platforms are on the rise; and Amazon takes the lead, with effective tools and support systems that make it easy for small and medium-sized businesses (SMBs) to generate profits on the site with just the click of a […]

Stop me if you’ve heard this before: a new brand of cannabis is being launched. Marketing is composed and presented with buzzwords and concise phrases. The packaging is minimalist and well-designed, with sleek fonts, clean lines, and a tasteful yet neutral color scheme. There may even be a celebrity involved. The weed that should be […]