Storytelling is not an easy thing to do. In fact, it is quite complex. Imagine telling a story about a true story that you were originally part of, which was actually just a lie created by someone else telling their own story, which was false. Wrap your head around this.

Director Jono McLeod found himself at the center of this labyrinth of tales. With scattered puzzle pieces laid out in front of him, he slowly put them together to make the documentary.”My old school.”

The trick of Brandon Lee was breaking news across the UK and the world. In 1993, 16-year-old Lee enrolled at Bearsden Academy, a secondary school in an affluent suburb of Glasgow, Scotland. Over time, he became somewhat “popular” with teachers and fellow students. He performed in the school musical and introduced his friends to new, hip bands. The only thing was… Lee had previously attended Bearsden Academy… in the 1970s. Eventually his true identity was revealed and it shocked the masses.

The documentary “My Old School” unveils the amazing true story through the eyes of Lee’s classmates, including McLeod, who is directing the film.

Pamela Price / LATF USA: I had an entertaining ride watching this documentary. Congratulations to you two. I know it’s been a trip. It’s a true, incredible story. I experienced a lot of different emotions. In fact, I was quite touched towards the end. Jono, as someone whose background is in journalism and you were a classmate of Brandon; How did your survey come about? I know there was the article, but how did it turn out and were you as shocked as everyone else when you found out all these different facts about Brandon’s trip?

Jono McLeod: Yeah. There was a big gap between the 1995 story and the making of this movie. I think when I started making the movie, the very first person I interviewed was Brandon himself. And in fact, what I realized was that a lot of our understanding of this story was informed by the fact that the only person who had told it for all those years was… Brandon. You know, he published several memoirs, he toured the chat circuit at the time and gave newspaper interviews and everything. And everything that we generally understood was kind of fueled by that. But actually, the process of getting my class back together and saying, well, wait, actually, what do you remember happening? I came to realize that “surprise, surprise”: Brandon’s version of events was not the most reliable. I’m so easily fooled. I could still be fooled today, as I was in 1993.

Because there was no precedent or no one else to talk to. Like, “How do you lip-sync a real person in a documentary?” And also I had such a strong connection with – It’s a huge story in Scotland. In the early 90s when that happened and a few years after that I was going to do a movie, which is actually mentioned in “My Old School…” I was going to direct and be in a movie playing Brandon. A tragedy 25 years ago. So. Jono asking me to do this was not only a big challenge technically, but it was also me coming back to a character. I was supposed to have played. My version of the movie fell apart, but I was going back to something I was going to do a quarter of a century ago.

So it was an amazing experience for, you know, the way things come back to you. I’m really happy because I think this film is a much better version of the one I would have made. It’s more from the point of view of the people who were there, no. And it’s about how memory changes so much. And you can all go through the same experience, but your versions of that in terms of memory and how your memory changes to it can differ incredibly.

Pamela Price / LATF USA: Have you ever had the chance to meet Brandon?

Pamela Price / LATF USA: How did the shoot go in terms of lip-syncing? Did you film Alan speaking and then put on the voice?

Jono McLeod: It would have been a challenge for Alan. (laugh)

Jono McLeod: The very genesis of the film was that Brandon agreed to an interview. So his line in the sand was “I’m ready to be interviewed. I am ready to tell my story. He’s always been willing to tell his story in different ways, but, to this day, he just didn’t want to be seen on camera for whatever reason. We can all make guesses as to what it may be. So I knew that would be the starting point that I would have this audio. Now I look back now and wonder “why didn’t I just make a thriving podcast?” It would have been much easier. I would have finished four years ago. But, I knew there would have been successful lip-sync performances in the past. But what I was trying to do was hang an entire movie around one actor’s performance. But actually, in a film about going back in time and revisiting your past, who better to take on the role than the man who was supposed to play Brandon all those years ago.

Pamela Price / LATF USA: I would like to have your two points of view on the creative process. The animation narration, between that and then the classmates characters themselves. Alan, were you able to sit down with the classmates and tell them about their stories before they did their interviews? And Jono, talk about the animation process and the creation of these characters.

Alan Cumming: I didn’t meet the classmates before the party in Glasgow. The film premiered at Sundance, but it was then at the Glasgow Film Festival and there was a party afterwards. I met them all there and it was amazing because I saw them over the last few years in various cuts of the movie and then met them all and saw them all interact with each other; it was like they were back in high school. It was the same little groups and there was this kind of bully going around buying people drinks and apologizing. It was really amazing.

It was the first time. But I felt like I knew them the moment I met them, but I had never met them before.

Pamela Price / LATF USA: You were putting yourself in someone else’s shoes at the high school reunion. 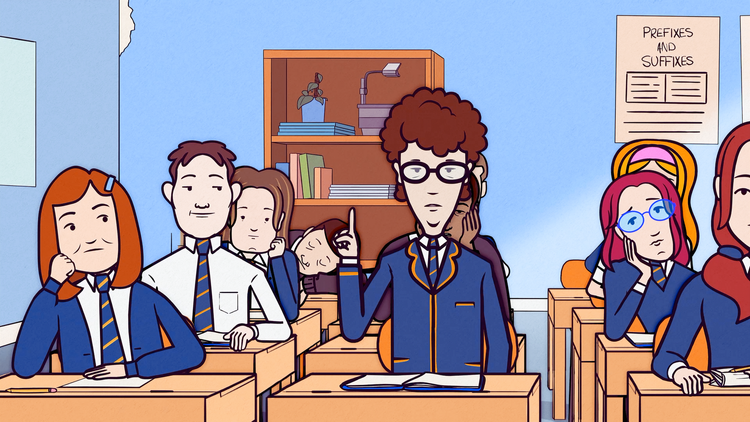 Pamela Price / LATF USA: I bet. And tell me about the Jono animation.

Jono McLeod: Yeah, it’s a very talented Scottish animation company called Wild Child. I realized I was doing a movie in the 90s about this dude with the monotonous North American accent, big curly hair, and glasses who walked into my class in the 90s.

He was a male version of Daria. The icon of 90s animation. So absolutely, we wanted to give him a nod. It was a starting point for us, but we were inspired by other animations of that time. And also our film goes further back in time. And, and we watched things like Archie Show and Scooby Doo and stuff like that. I knew the story was quite complicated and wanted a very easy way for the audience to follow what was going on. And, ultimately, animation was the perfect way to achieve that.

Pamela Price / LATF USA: Often when there is a documentary. sometimes it goes to Netflix or whatever and then it becomes a movie. So, Alan, do you think this will look for another step or do you think this is the right storytelling note to end on?

Alan Cumming: I think it’s the… I mean the older I get, the more I realize that I like documentaries a lot more. When I get on a plane, I immediately click on the documentary section. I don’t know, maybe because it’s my job to do re-enactments, dramatic re-enactments of things. I’m just much more interested in real life and people going through something; telling their side of this story. It’s much more interesting to me as a viewer. Like I said, I don’t always watch a lot of stuff I’m into – I probably would watch this – because I actually like stories that are told by the people they happen to. Maybe this will continue. Perhaps he will be overtaken in 25 years by a young filmmaker. “Hey, I’m doing Brandon’s life story.” (laugh).

Pamela Price / LATF USA: You’ll come back and play it in a different form, who knows? !

Primark is selling a pair of slip-on shoes similar to the infamous Crocs clogs, but shoppers are unconvinced by the £4 shoes as some have called them “the ugliest ever”. Primark sparked debate after selling £4 pair of shoes ( Image: Reuters) Primark has come under fire for selling a pair of £4 shoes which […]

I was one of those kids who walked barefoot as often as possible. During the summer, I would go days without ever putting on shoes. The bottoms of my feet were developing thick, hard calluses. When I helped my parents in their garden, I was most often barefoot. I loved the feeling of dirt and […]

Sale of fake Louboutin shoes on Amazon is not trademark infringing, opinion says

“After Brexit, neither the CJEU’s opinion nor decision – when we have it – is binding on the UK. It is interesting to note, however, some early divergences between the UK and the EU. EU on the issue of liability of online marketplaces and websites for trademark infringement,” said trademark expert Gill Dennis of […]